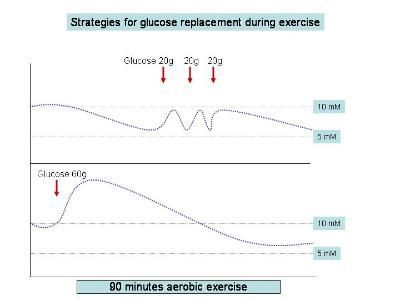 During exercise, all athletes loose fluids, salts (electrolytes) and use energy. As we have already seen, in diabetes there is the additional problem of variation in blood glucose. For some sports, glucose replacement will improve performance and reduce the likelihood of hypoglycaemia. A number of sports drinks have been developed to help reduce these changes, and some are potentially useful in people with diabetes. To be effective, Sports drinks need to be rapidly emptied from the stomach and absorbed.

Research suggests that carbohydrate replacement during exercise may be beneficial to performance of events of high intensity exercise of ~1 hr duration. Benefits to the performance of endurance/ultra-endurance events, and prolonged intermittent exercise (e.g. team games) are well documented. Carbohydrate replacement during prolonged exercise enhances immune function by reducing the immunosuppression seen in the hours after the session.
Sports Drinks
Lucozade, contains about 17 grams of glucose per 100 ml, and no salts, is good for raising glucose quickly and replacing glucose when you want to limit fluid intake
Lucozade sports, contains about 6 grams of glucose per 100 ml, and has some salt, and is better for replacing fluids when blood glucose is not falling rapidly.
Gatorade (not widely available in the UK) is a carbohydrate-rich fluid (6-8% carbohydrate), with sodium and potassium.
Powdered sports drinks can be made up to vary glucose and water content, to deal with each persons requirements, for example a cyclist may need less fluid and more glucose (to save getting off for a pee) than a climber, who is becoming dehydrated.
PSP22 is the complex carbohydrate energy fuel for high-energy performance, made from maltodextrin, which is over 98% glucose polymers. PSP22 exerts a very low osmotic pressure even at high concentrations.

Another handy glucose support is Hypo-fit which comes in a mixed range of flavours
The sachets are easily carried, with each sachet containing 13 g glucose 100 grams of Hypo-Fit contains approximately 74.5 grams of glucose. Further information from http://www.arcticmedical.co.uk/html/hypo-fit.
It is extensively used in Benelux, Germany, France and Scandinavia and my understanding is that it dominates in those countries.
Non diabetes users include
· Llanberis Mountain Rescue, in North Wales, reputedly the UK’s busiest mountain rescue team, carries Hypo-Fit in all rescue bags. · “Paras”, who used it during tough mountain exercises, and their general view was that it was quicker acting and had helped, more than anything else, when needed.
· Skiers, surfers, canoeists and others who wear tight fitting clothes and find the light, slim-line, very flexible sachet a great advantage.
Energy Content of Foods
Food Carbohydrate Level (g)
Large Portion Spaghetti 90
Large Portion Rice 60
Large Portion Jacket Potato 45
Large Tin Of Baked Beans 45
2 Large Thin Slices Of Bread 30
Lucozade Sport 500ml Bottle 32
1 Pint Of Milk 30
Medium Banana 20
Apple 10