What Happens When You Exercise?

Management of Blood Glucose Control
This somewhat different to conventional diabetic management, this site aims to outline the physiology of endurance exercise. The diabetic athlete needs to understand the effects on glucose and intermediary metabolism during exercise to effectively adjust insulin therapy and alter nutrition during training and the event.
The Technical Stuff
Exercise increases oxygen and fuel demands. To meet this, there is a synchronized response by the heart, lungs and hormonal systems. The increased oxygen demand of muscles is met by increased cardiac output and respiratory effort. For young adults with uncomplicated Type 1 diabetes, maximum oxygen consumption, carbon dioxide output, ventilatory capacity and cardiac output are similar to non-diabetic subjects. The maximum aerobic capacity is also similar. The increased energy requirement is met from intra-muscular glycogen and by mobilization of other fuels from remote body stores. The metabolic response to exercise is altered in Type I diabetes.
With the onset of exercise, muscle contraction leads to an immediate fall in intracellular adenosine tri-phosphate (ATP) levels. These high-energy compounds provide the energy for the muscles to contract. High-energy phosphate levels are replenished initially from stores. These are very limited and have to be replaced by the part of the muscle that burns fuel (the mitochondria). Intra-muscular glucose stores (glycogen) are immediately mobilized and is the major fuel source during early exercise. As exercise continues, glucose is taken up into muscle from the blood stream. In health blood glucose concentration is kept within a narrow range during exercise, with muscle glucose utilization closely balanced by liver glucose release. This stimulation of glucose production, is induced by exercise and falling blood glucose, and is controlled by rapidly increasing levels of the hormones glucagon, the catecholamines, and growth hormone. Low levels of insulin, controlling hepatic glucose output, regulate glucose production. As the exercise continues, other fuel sources become available. Fats are mobilised from stores and can be used directly by muscle, and are also converted into ketone bodies by the liver. If there is enough oxygen in the muscle these are the preferred fuel source. If the muscles do not have enough oxygen, they cannot burn fats and other fuels, and in this situation, muscles produce lactate. Exercise must be limited by the build-up of lactic acid. Physical training builds the capacity for oxygen delivery through increased lung function and cardiac output, and to increase tolerance to raised lactate concentration. The key limitations to prolonged exercise are the ability for the cardiovascular system to provide oxygen to the tissues, the quantity of fuel stored in the form of glycogen in the skeletal muscles, the capacity for gluconeogenesis and mobilization of fat stores. 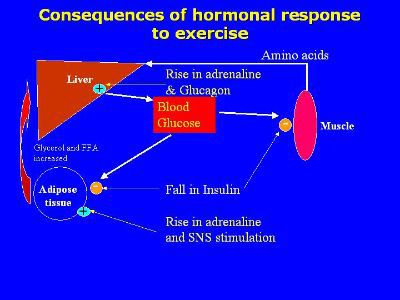 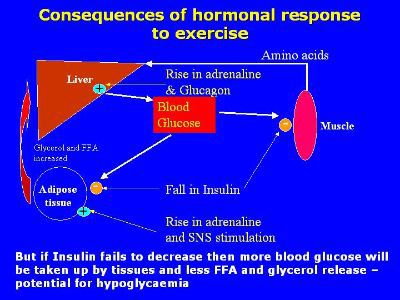