By Hannah ForbesAt the beginning of 2007 I decided that I was going to have a “year of challenges” culminating in a 100km walk. The event that I entered is called Trailwalker and involves walking 100km in 30 hours or less along the South Downs in teams of four. I was diagnosed with diabetes when I was nine and I have played rugby, with varying degrees of diabetes control, for 5 years but was aware that I had never done an endurance sport before. 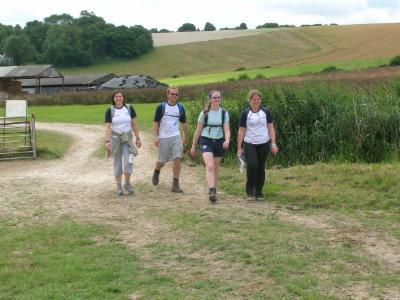 For rugby and other high intensity sport I would try to eat about 2 hours before starting, reduce my short term insulin by 40% and have very short acting sugar at half time. I still often ended up very high after sport and going low in the night and was aware that if I had to keep going for up to 30 hours this would be a problem. I was given the advice to stop every hour and do a blood test and eat 25-30g of carbohydrate which worked brilliantly. I ate a meal before starting and then stopped to do a blood test and eat every hour. The stops only took about 2 minutes so they didn’t even slow me down. I also ate meals at roughly normal times but had six meals in 24 hours having a night breakfast, lunch and dinner too. If my sugars were too high I reduced the amount of the snack, but only to 15-20g carbohydrate and if I was too low I had about 3 jelly babies or fruit allsorts and then my normal snack as well.

During training my main problems (apart from painful feet!) were with walking on the second day of the weekend. We did, for example, a 35km walk on a Saturday and then a 35km walk on a Sunday and I would be much lower on the Sunday. With hindsight I would now drop my long term insulin by 20% on the evening of the Saturday however I didn’t know this during training. The other problem was going low the night after finishing and then feeling sick the next day. For this I reduced my long term insulin after the event by 20%. I also struggled on the training walk that I did overnight. My sugars went up in the early hours of the morning (I had taken my Glaugine as normal) so to counter this I carried on having meals and Humalog during the night which worked well.

The event itself went very well; we finished in 22hours and 25 minutes and came 74th 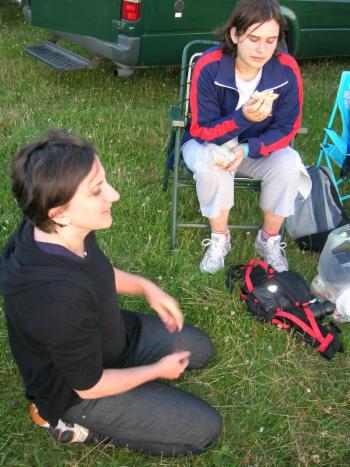 out of 295 teams finishing, of 502 starting! The biggest problem for me was that after about 70 km I started to feel sick every time that I ate. This meant that I felt sick for half and hour per hour. I don’t know if there is anything I could have done about that but I didn’t know it was going to happen until I did the whole 100km!

I think I trained more and tried out more ways of doing things because I am diabetic, it meant I was able to try out what was recommended, make changes where they were needed and that I had confidence that I knew what I was doing. I have started doing more long distance walks and cycle rides for fun and enjoy the fact that I know how to deal with my diabetes while doing them. I have learnt that I need only 20g/hr carbohydrate for long cycle rides and that long swims need more sugar if they are in cold water. I am also fitter for this season’s rugby!