One of the world's finest swimmers, Gary Hall Jr, the US gold medallist has type 1 diabetes. He described his management and I´ve summarized it below.
Gary Hall, Jr. 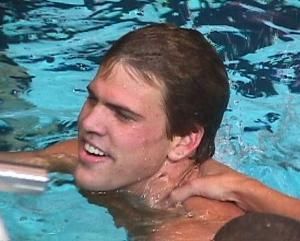 Gary took between 4-8 injections of Humalog insulin daily with very frequent blood sugar monitoring. His took high carb drinks before and following training and events, and kept his BG above 10 prior to racing. His main problems were with endurance and stamina training rather than his short event, which he called splash and dash! This is very much different than most peoples swimming which is likely to be slower and for 30 mins to an hour. We suggest that the pre-swim insulin dose is reduced, and that some glucose is taken every 30 minutes or so. The amount of dose reduction and the amount of glucose consumed will change as the speed increases and training lengthens. If you are swimming as part of a plan to control your weight, then is less effective as water supports your weight and the typical calorie burn is less for the same time than with anti-gravity exercises such as running.
Athens 2004
Adapted from Anne Peters Harme, Professor, Keck School of Medicine, University of Southern California; Director, USC Clinical Diabetes Programs, Los Angeles, California.
Preparing for Athens
As Gary trains intensely he needs more insulin, largely because his carbohydrate intake is so high -- 4000 to 5000 calories per day, with 60% or so of his calories coming from carbohydrate. When he's training less hard, his caloric intake and percentage carbohydrate ingestion are markedly reduced, so his insulin requirements are less. Another reason his insulin requirements are higher during intense training is because of the catecholamine response to such heavy training. As a sprinter, he doesn't do lots of slow long-distance swimming; he does more intense episodes of training, which may be more physiologically stressful.
Gary's insulin requirements change if he is training once a day or twice a day or 3 times a day. They differ if he is doing more weight training than cardio or the other way around. Time spent training in the pool is different from time spent training on land. Calculating doses incorrectly means he's too low at night, a delayed effect of training, but giving too little insulin overnight results in fasting hyperglycemia and a bad workout the next day. An insulin pump might offer the fine-tuning of basal rates that would better match his physiologic needs, but as a swimmer Gary can't stand the drag of the tape and infusion site on his skin against the water. So he has become a master at adjusting his insulin doses, using a multiple daily insulin injection regimen that is complex and varied.
Most of the time this approach works; the frequent insulin dosing and the 10 or more times he tests his blood sugar levels each day keep his sugars under control and his A1C level below 7%. Sometimes, as with all patients, it doesn't work as well. Hopefully, this doesn't coincide with race days. It is not easy to manage patients with type 1 diabetes. Gary, like all patients with diabetes, dreams of the day this disease is cured.
Gary got another bronze medal for being part of the 4 x 100 relay team, even though he didn't swim in the finals.
The 50-meter freestyle sprint is the swimming equivalent of the 100-yard dash: once across the pool and you're done. Swimmers from all over the world -- Maldives, Trinidad, Croatia, Korea, Malawi -- turn out to try their luck in 11 preliminary heats that start with the slowest qualifying times. Gary's heat was number 11, the last. Heats go by quickly; there are no introductions, just "swimmers take your mark," get set, go... one splash and the swimmers are at the other side in 22 seconds, give or take a few hundredths. Gary's hopes as a swimmer, and to some degree his future, hang on getting it right. The buzzer sounds, the announcer speaks, and Gary leaps into the water like a coiled spring coming undone. He streaks to the other side, fast-twitch muscle propelling him seamlessly through the water. He makes no errors, and he wins. He wins the prelims. He beats the South Africans and the Dutch and the Russians.
Finals Saturday, 21 August 2004
Gary won the gold. The race was 21.93 seconds of pure speed through water. Gary won by 0.01 of a second. Duje Draganja, his friend from Croatia, had a time of 21.74. In distance this translates to a difference of about 1 fingertip -- 1 distal phalanx -- between the two. How many times a day Gary pokes those fingertips with a lancet to check his blood sugar levels. And how hard he has worked to get where he is today -- so much harder than most. His fingertips help keep him alive by providing the data he needs to balance his blood sugar levels; his fingertips help win Olympic gold medals.
In 1996, before he had diabetes, he won a silver medal in the 50-meter freestyle; in 1998 he was told his swimming career was over because he had type 1 diabetes. Just 2 years later he was back, and tied for gold in the 2000 Olympics. Now, 4 years later, with diabetes that is harder to treat than ever because he has lost much of his residual beta-cell function, he has won a gold medal in his event all for himself. He has only gotten better with diabetes and age. When asked why he does it, why he pushes himself so hard, he says, simply "I just love to race." And he doesn't let much get in his way.Gary has taught us what is possible with diabetes. Diabetes is tough, but it is controllable. Along the way people can lead the lives they aspire to, with role models like Gary to light the way. Beijing in 2008?
Further information on Gary Hall and his management of diabetes can be found on his site. 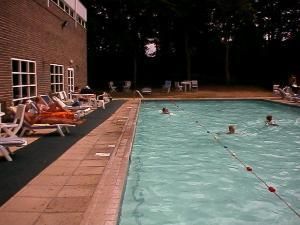 I have been diabetic for 29 years having been diagnosed at the age of 13. I took up swimming training to complete the BT swimathon back in 1992, which I managed. However, at the time there was really no guidance on what to do in order to achieve sustained energy when competing in sports. I swam 2000m in just under 3 hours. I needed to take insulin in order to convert sugar into energy but I also needed to consume glucose, in the form of fruit juice based drinks to maintain a reasonable blood sugar and not go hypo. Needlesstosay whilst competing I had to get out to go to the loo!

I continue to swim 50 x 25m lengths once or twice weekly. I have found that I need to start with a glucose of around 12 mmol/l . Any less and I go hypo before completing the 50 lengths. If I start with a lower blood sugar then I boost it by taking 4-5 glucose tablets prior to swimming. This usually sustains me. As soon as I get out of the water I drink a 250ml carton of 5 Alive Juice. This I find is perfect as it contains natural fruit sugars as well as added sugar.

I found over 29 years anything is possible just that sometimes it is easier to achieve than others but it does not stop me trying and I am stubborn enough not to give in until I get it right.
Advice on swimming published by Diabetes U.K.