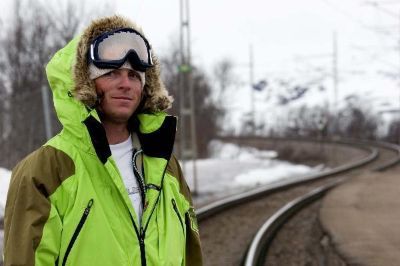 Like most people, when I was first diagnosed with type 1 diabetes it was a very scary and unsure time of my life. My head was full of questions like, “Why me?” and “What do I do now?” It was made worse for me as I was stuck in a French hospital for 10 days with only one English speaking doctor. As a professional snowboarder, my main concern how having diabetes was going to affect my snowboarding.

I was very lucky because I first got into snowboarding at a young age. I was 8 years old and my mother was living in the Swiss resort of Flims. I was at boarding school in England but I went skiing during my winter and Easter holidays. This gave me plenty of time to practise my skills and I used to spend day upon day with my brother up in the mountains jumping off cliffs, building jumps and really having the time of our lives. As my skills improved, I soon realised that I wanted snowboarding to become more than just a hobby. I got the chance, at the age of 17, to put myself up against the best British riders at the British Snowboard Championships and I had a great week. I was on the podium for all 4 events and was placed 2nd overall in my age category. This set the building blocks for my first sponsorship deal with Oakley and put me on the road to become a professional snowboarder.
I’ve been a professional snowboarder now for 7 years. I spend the winters travelling around the world following the snow doing various competitions and photo shoots. I also work closely with a film company called Run Jump Fly (www.runjumpfly.net) doing various ski and snowboard movies. I am sponsored by Oakley, Allian, Verbier, John Nike Leisure Sports, Farinet Hotel and Ski Club of Great Britain.
My doubts and fears about having diabetes were quickly put to one side. I had a great group of friends, family, doctors, nurses and sponsors who where right behind me and supported me in everyway possible. I’m not saying that times weren’t hard to start with but I’ve always had the attitude, “There are millions of people a lot worse off than me, grit your teeth and get on with it.” This attitude has led me to have a great professional career with only the odd minor blip. In some ways having type 1 diabetes has helped me because my diet is a lot better now so I’m in the best shape of my life, quite ironic really!
I fin 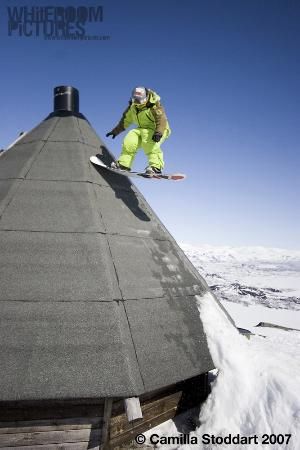 d that managing my diabetes comes down to two main factors; a good diet and being prepared.

A good diet is centred around having three meals a day, which is very important especially when I’m on the mountain. For breakfast I have a good bowl of cereal and some fruit so that I have plenty of carbohydrates to keep my sugars stable during the morning. One thing that is very important is that my breakfast always reflects what I plan to do during the day. Lunch again is centred around having enough carbohydrates to last the afternoon so a bowl of pasta, plate of chips or a sandwich (if I’m in a hurry) is normally the food of choice. Suppers are a lot more liberal and depending on how the day went with regard to sugar levels I eat what I want but always have my fill of greens.

Being prepared is easy. I always make sure everyone who I snowboard with, go out for drinks with or play sport with knows that I have type 1 diabetes. When I’m snowboarding, I explain to my riding partners all the signs to look out for in case my sugars go too low or too high. I also make sure that they carry a sugary snack with them at all times in case I lose mine. The preparation only takes a few minutes a day and is second nature to me now. It’s also one of the most important things I do each day.

For people wanting to get into snowboarding or skiing I would just say follow some very simple rules:

Listen to your body, if you are finding it hard to adjust to the climate, don’t push yourself and keep a very close watch on your sugar levels.

Prepare yourself for a day in the mountain; this means have a good breakfast, don’t drink alcohol on the mountain and make sure everyone in your group knows that you are diabetic and they know what to look out for in case you have a hypo. Always take the time to stop for lunch too….

Take a rucksack with you so that you can stop your insulin from freezing. If that happens you are in trouble. Also you need to keep your testing kit safe and warm as it won’t work if it’s too cold. To combat this I wrap mine along with my insulin in a hat or a sock within my rucksack. I have not had too many problems with my kit freezing. Also chose your timings for testing yourself, it’s never fun taking your glove off when its minus 20, so wait till you are in a warm lift or a restaurant.

Enjoy yourself, winter sports are great fun and if you look after yourself, you will have the best time of your life on the snow, well, I do.

Me and my brother also do a wide number of lectures. Last autumn we launched our schools lecture tour around prep schools in the UK. They have been a huge success as they are motivational, inspirational and most importantly educational. Our lectures are illustrated with break taking video footage along with some amazing photos and of course, the kids get to look at all of our equipment. The lecture is visually exciting and informative and is aimed at educating pupils on all aspects of extreme skiing and snowboarding. We also talk about choosing Freeride as a career, respect of the mountain and becoming a professional athlete in a relatively ‘new’ sport. For more information please have a look at our web site: www.southwellenterprises.com

Here are a few quotes about our lectures: 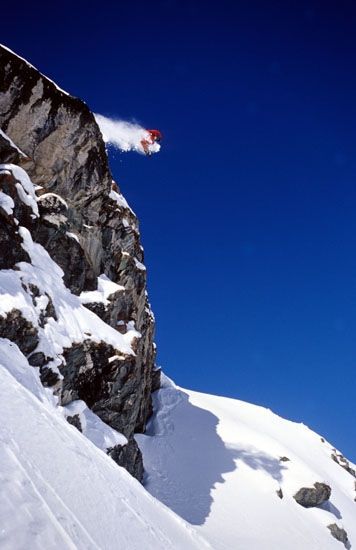 "Nick and Chris did a fantastic job of keeping the audience captivated by their tales of extreme skiing and boarding adventures. They were very slick, professional and above all entertaining!"While most of my achievements have been based around snowboarding, I have also achieved a few personal goals. Last summer I rode from John O’Groats to Lands End on a monkey bike dressed as a cow for Diabetes UK, which was great fun but painful achievement! Last year I set up my own company with my brother, Southwell Enterprises, which has been a great success. We specialise in ski and snowboard event management and we also carry out school lectures on careers in extreme sports.

With regard to snowboarding, I have been the only snowboarder to do a demo during the World Free Ski tour (Verbier ride 05 and 06). I also achieved my best ever result this winter by coming third in the Scandinavian Big Mountain Championships. One of my snowboard sponsors, Allian, has now put me on their international team, which I am very proud of.

Next season, I am planning a trip to Kamchatka; here along with 4 other professional skiers and snowboarders we will take on our greatest challenge yet. The idea of the expedition is to explore the un-explored. The team, who are all bold and experienced British winter sportsmen, are going to tackle this unforgiving terrain and seek out its hidden virtues. We will be heli-skiing in some of the worlds most beautiful and remote places, as well as cat skiing on the backside of active volcanoes in order to push ourselves and the sports that we represent to the limit. It will be our ultimate challenge.

I have also qualified for the 1st step of the snowboard world tour, so I will be spending a lot of time preparing for that.

Along with Ride Freesports, Southwell Enterprises organises the Davos Klosters Ride, The British Big Mountain Championships, which happens in March. This event is now in its second year. Please have a look at www.davosklostersride.com for more information.

Apart from that I will be based in Verbier for the winter and I will be spending a lot of time travelling around and following the snow.

I think my greatest achievement so far has just been getting on with my life and doing what I want to without my diabetes holding me back too much. It’s hard work at times but the rewards are plentiful.