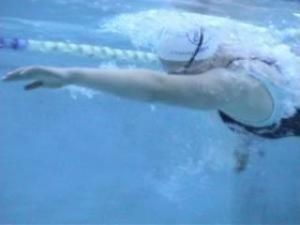 Her particular speciality is the 200-400 metre front crawl. She is noticing the typical problems of the diabetic athlete, namely, wild fluctuations in blood sugars during and post-training, post-event and loss of power after 4-5 minutes in her 400-metre discipline.

Tuesday-she has just 4 doses of insulin per day. She does training in the morning for lactate tolerance, which are 7-8 burst of a minute. Her blood sugar rises rapidly during this period.

Wednesdays-she trains in the evening with 3 hours of training supported by 35 gm of glucose without insulin and has he evening meal with 8 units of insulin.

Friday-training is like Tuesdays.
Race Days
On race days Lindsey wakes at 7.30 am and has breakfast of 60 gm of glucose with 10 units insulin and does her warm up period. In these races, she finds that her blood sugar rises very rapidly from a baseline of 8-10 and up to as high as 20, and she feels very unwell with this. She also finds that in the last minute or so, she hits a wall of lack of performance, which she describes as dying and is unable to compete to maximum levels.
Solutions to the Problem
Lindsey needs to be clear about the difference between sprint events and duration events. During duration events, she needs to ensure that there is regular glucose taken in the form of Lucozade powder 10-15% at the rate of 30-60 gm per hour, and that she needs to check her blood sugar prior to starting the event. If it is less than 8 then she needs to take 30 gm prior to the event.
On finishing training, she will need a snack with some insulin. On sprint events and on race days, she needs not to take glucose in any form before the event. Lindsey needs to reduce the effects of long acting insulin prior to the event and may need to swap Glargine for Isophane on the night preceding a race. On finishing the event, she needs to take a dose of insulin to counteract post exercise hyperglycaemia. If she is having further events later on in the day, then Lindsey will need to take a bolus of carbohydrate with a larger dose of insulin to replete her muscle glycogen sources.
Lindsey needs to be careful of her dental hygiene. If she can take the glucose using a straw, that would be helpful, otherwise Lindsey needs to use chewing gum, clear drinks or regular teeth cleaning.
Keith Frizzel, 50 and 100 metres swimming
Keith, from County Down is a 15 year old young man with diabetes of 6 years duration who aims to swim at the highest level. He is currently in the upper 10 of all Ireland racing and is also well placed for his age group and he has chosen to swim the 50 and 100 metres.
His diabetes does not appear to be very well controlled as judged by his HbA1c, although this is likely to have improved since you substituted NovoRapid and Lantus. He is taking 30 units of Lantus and between 8-10 units of Novorapid three times a day.
His problem relates to some periods of relatively poor performance whilst swimming, but also marked periods of hypoglycaemia. His training is mostly in the afternoon. His coach sets them mixtures of 400 metres, 100 metres and 50 metres in 2-8 repetitions with exercise lasting about an hour and a half.
Keith notices that his blood sugar falls rapidly during these episodes and he sometimes has to get out of the pool to deal with hypoglycaemia. This was most marked during a training session at Bath University where he was unable to complete this because of prolonged hypoglycaemia.
He trains everyday in the afternoon except for Friday mornings. On this day he trains early and has no breakfast or insulin but notices that his blood glucose is very high after training. He also trains on Sunday where he does have breakfast and insulin and notices that his blood sugar falls rapidly.His event days are mostly on Saturday and these could be throughout Northern Ireland but also in England and Ireland. These are difficult to predict as he has varying races throughout the day with lots of gaps between them
It may well be that Lantus is not the ideal insulin for him and he may need to switch to Detemir, having 2 bolus doses, keeping the night time does constant but reducing the daytime dose depending on whether he is training in the morning or the afternoon.
He could have some insulin 2-4 units to deal with his snacks that he has at school in the middle of the morning.
He needs to check his blood glucose before and after his swimming sessions at the very minimum and ideally whilst he is swimming. If his blood glucose falls rapidly during the training sessions, he needs to substitute glucose 30-60 grams per hour in the form of Dextrosol tablets, Jelly Babies or Lucozade or other drink. These should be given in boluses of 10 grams every 20 minutes or thereabouts.
On days when he is exercising in the morning, he needs to cut his insulin down substantially and he may need just 2 or 4 units with his breakfast on Sunday mornings.
Keith would do very well with an insulin infusion pump. This will enable him to have a normal basal dose for overnight, and a low basal for use during swimming sessions and be able to give him the flexibility to have bolus doses when he has anything to eat. This is the regime that Gary Hall Jnr, the World Champion uses.