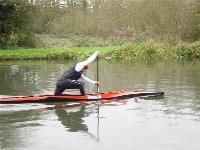 Since the age of 16 I have been competing in both sprint and marathon
canoeing. Previously, I have found the demands on my body difficult to cope with whilst competing in sequential weekend races. These races involve
heats and finals in distances including 200m, 500m and 1000m in both
singles and doubles with little recovery between.
Due to this I predominantly focused on marathon canoeing and in the last year of being a junior (18 years old) I finished third in the Junior
Europeans, over 12 miles. As a senior I have competed at numerous World cup events in a double canoe, winning the National championships in 1988 and finishing 8th in the World Championships (26 miles) in 2001.
I currently work as a senior radiographer at the Royal Brompton Hospital
which also means working 24 hour shifts on site and periods of on call from
home, which can sometimes create difficulties in controlling my blood
sugars. 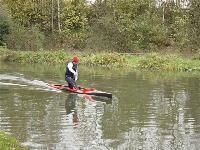 Depending on the time of year and pending races, my training consists of
14-20km paddles after work, usually taking anywhere between 1 to over 2
hours. Races are usually held on a Sunday and races can vary from 8 miles
for a local race, 15 miles for a national selection race and 26 miles for
full internationals. My current aim is to race internationally and compete
for top honours. I am currently taking Actrapid three times a day; vary my units depending on work/training schedules and Lantus in the evening. I monitor my blood sugars regularly.