By Julian Donovan
Roots
Le Parkour is an internationally new activity originating in the Parisian suburb of Lisses, France around the mid 1990’s, exploding in popularity and recognition throughout the globe in the last few years. The ‘Method Naturelle’ was a system of training founded in 1905 by Georges Hebert (1875-1957) as a way of physically training as well as developing moral values, with large emphasis on altruism. Instead of the physical education such as that of gymnastics, Hebert wanted to develop something closer to nature and more complete, encompassing all basic elements of movement including quadrupedal, throwing, jumping, defending, as well as increasing the body’s resistance to harsh conditions. With the motto of ‘Etre fort pour etre utile’ (be strong to be useful), training took place mainly outdoors in purposefully built areas, becoming the first obstacle courses to later be adopted by military and firefighting units throughout the world.
David Belle, born in 1973, developed a passion for the obstacle course (le parcours du combatant) after spending some time in the military fire brigade as a young man. He started training every day in different environments, practicing a discipline without a name, centred around strength, speed, efficiency and power. It began to develop as other enthusiasts around Evry and local areas shared ideas, finally being named as Le Parkour, a discipline in its own right, in 1998.
It started to trickle out of france around early 2000, exploding into the UK with the showing of Channel 4’s ‘Jump London’ in September 2003. Since then the discipline has been growing in exposure and practitioners through the internet, adverts, shows and other media.
Le Parkour 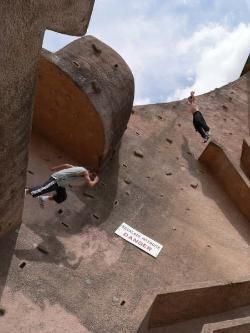 I am 19 years old and have been a type 1 diabetic for 5 years, practicing parkour for 3 years. As such I am by no means a master of my diabetes or Parkour, but I wanted to give some insight into how I practice, so that it may help others.

In essence, Le Parkour is the discipline of getting from one point to another with efficiency, speed and control. Imagine an escape/reach situation, trying to get somewhere as fast as possible, like being chased by somebody. Le Parkour gives you the skills to be able to put distance and obstacles between you and that person, or the ability to cross a distance to reach someone in need. It teaches you to react quickly, have confidence in yourself and your own ability, develop your mental capabilities and also become faster, more agile and stronger. As such it is a very complete way of training and requires the entire body and concentration of the mind.

Contrary to what a lot of media shows, the large majority of training tends to be repetition of movements and conditioning as opposed to large roof jumps and somersaults (somersaults and spins are not part of Parkour, they go against the idea of efficiency and speed). This is especially important for younger enthusiasts as bones and growth plates are still developing. In general though, the human body is not designed to take repetitive impact without sufficient gradation in terms of training. Without adequate conditioning, problems can occur such as joint pains, shin splints, tendonitis and worse. So with this in mind a strong condition is required to practice the more demanding movements of Parkour, always building upon it with adequate strength training and supplementing it with flexibility to ensure a more complete physique.

Aside from the physical side of Parkour, the mind is another aspect to take into account. Personally, I think that Parkour requires about 50/50 mind and physical to perform many of the movements, differing at times when perhaps you feel stronger or more confident one month than the next. For me, my physical side currently outweighs my mental capability by a fair amount as I feel strong and very capable in my body, but confidence is something which I need to work on. This can really hold someone back, not just from Parkour but anything in life. Developing good mental fortitude and confidence is something important, but also something that comes through practice and training.
Personal Diet
My diet/insulin doses typical of this week are as follows:
Breakfast: Porridge/alpen and banana, 3-6 units Novorapid
Lunch: 2 bananas, small muffin, tuna/chicken sandwhich, 4-8 units Novorapid
Dinner: Hall meals, very varied but I try and get about 1/3 vegetable at least, then something like lasagne/chicken curry/pasta bake etc, sometimes a lovely dessert ;), 5-10 units Novorapid
Pre/post-meal snacks: Fruit, flapjack, chocolate bar, usually no units
Night time: 15-25 units Lantus
All these units of insulin depend on the amount of activity I am undertaking throughout the day and amount/kind of food I am eating.
Generally I try and stick to a low GI approach, but do find myself giving too much insulin fairly often and have to have some lucozade/chocolate/flapjack or similar to compensate. I find that if I do about 2 or 3 hours of training a day it stabilises my blood sugars substantially.
Parkour and DiabetesGenerally I have never had any serious problems with training and Diabetes. The main inconvenience, is when going out after eating or being indoors with a good BM such as 8mmol, then finding that it plummets after 20 minutes or so of training, which means having to eat or drink something to level it out. This has only a few times completely stopped me from training, and is really only when going from a heavy loaded meal or inactivity to training.
I always take a lucozade and maybe some fruit/chocolate while out training as a session usually lasts a few hours. While training I check my sugar levels about once every hour or two, and its usually very steady. I also tend to at least eat a sandwich or the equivalent of about 500 calories about half way through the day. Its really at the end of a session when relaxing that the sugar level tends to drop and I need to watch out for the amount of insulin I will take that evening as my body is much more receptive to it after training. Generally though, I have encountered no real problems with practicing Parkour so long as I always make sure in advance I have something on me in case I become hypoglycaemic at all. Generally my HBA1C leaves something to be desired, usually being in the upper 6%. To rectify this I find that taking exercise is extremely helpful in regulating better levels. If I do no exercise for an entire day and am mostly stationary, for instance when studying, I usually need to take 2 or 3 times that amount of insulin than if I were active. Even so, if I go for a small walk or do some bodyweight exercises such as pushups for 10/20 mins, the blood sugar tends to shoot down as if the insulin had suddenly rushed into my system. It’s these peaks and troughs of blood sugar that I try to stay away from, which is achieved through watching what I eat and exercising regularly.
Generally I train about 20-30 hours a week, depending on work load and/or injury. For me this is an optimum amount and really helps keep my blood sugar under control a lot more.
LinksFor more information on Le Parkour visit:
www.parkour.net
www.parkour-videos.com
www.teamtraceur.com