Going to the gym is probably the most practical and therefore the most popular for of exercise, and for people with diabetes has the advantage of being in a safe environment, where it is easy to have you testing kit and food with you. Most gyms are supervised by gym staff. For Aerobic exercises refer to the running and rowing sections. 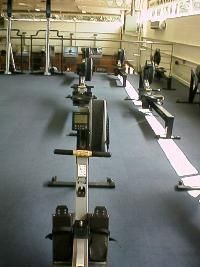 I never thought I’d be appreciate having diabetes but it was provided the spur I needed to get fit and even change my career, so it has certainly transformed my life and given me opportunities I may not otherwise have had.

I have been working as a Fitness Instructor and Personal Trainer for three and a half years now and have not looked back. Without my diabetes, I would not be working in the field of fitness at all. It was all due to one of Wycombe General’s diabetes nurses, Rhona, suggesting that exercise helped in the control of diabetes that I grudgingly joined a gym. To my surprise I enjoyed it so much that I even changed my job and I now work in the gym at Odyssey Health & Fitness Club in Wooburn Green, Bucks.

My fitness levels have gone from strength to strength since I restarted exercise in earnest. I started as a very unfit 22 years old. Having been fairly keen on sport at school and relatively active jogging and cycling in my spare time, I ground to a halt at university. My health was much worse, I caught every cold going, my joints ached so much that they kept me awake at night, I developed carpal tunnel syndrome in both wrists and my blood sugars were generally over 8 mmol.

My first run on a treadmill lasted an exhausting two minutes and it took me a lot of willpower to increase my fitness enough to come in second to last (followed by a significantly older gentleman!) in the Marlow Five Mile run six months later. This marked an amazing change for me: a dramatic improvement in my diabetes control, as well as a stone in weight loss.
From the beginning gym training has been a challenge to manage in conjunction with type I diabetes. I view my diabetes as part of my personality and self as much as anything; I wouldn’t be who I am without it. It has taught me a lot about self-motivation, dedication to good results and how to beat the odds. Exercising with diabetes just adds another dimension and means I am more determined to investigate how to best control it.
Controlling blood sugars is a steep learning curve for a novice! They often drop during, immediately after or several hours after a workout. Or conversely, what seemed a reasonable level to start on becomes high by the end of the session. If a blood sugar becomes too low I feel exhausted like I can’t go on (different to my non-exercise related hypo) and I cannot perform nearly as well when it rises. Lack of fuel (glycogen) being converted to energy in the muscles is the cause of both – all the energy has been used in the case of a low blood sugar and not enough energy converted in the case of a high one.

often drop during, immediately after or several hours after a workout
index-f36c09e4
index-f36c09e4.html
HTML document [ Bytes]
After reading around the subject and a lot of trial and error I found out enough to take part in most types of exercise with a fair chance of avoiding a low or high blood sugar, but it’s still not an exact science. I completed the Marlow Triathlon (a rowing machine instead of swimming, a cycle and run) last October, which marked a milestone for me. Training involved two-to-three hour sessions daily and it was vital to start with the right blood sugar or I would have to abort training. Even when my blood sugars had risen if I had a hypo I found that the intensity of the exercise meant it just kept dropping again and again. During the race I tested my blood sugar between each component, which slowed me down a bit (but less than a hypo so it was worth it).
Working in a gym has not proved a problem with my diabetes. Any client based work is always a risk for diabetics because there are times when you just have to excuse yourself to deal with a low blood sugar, but generally my control is good and I am lucky enough to have good warning signs for hypos. I test my blood sugars frequently and make sure I have my break halfway through my day. Shift work has not proved a problem at all. Lantus was a godsend: arriving just before I started full time gym work. The flat, constant action is ideal for shifts. Novorapid is also very useful. The best combination so far for insulin, I find.

Lantus
11572
11572.html
HTML document [ Bytes]
I workout either before or after my shift and aim to do something active on my days off; six to ten hours of moderate to intense exercise weekly on average. I do a mixture of cardiovascular and resistance exercise. Before a gym workout I aim to start with a blood sugar of seven or eight. Less leads inevitably to a hypo and more means I end up with a reading of 12-14. By the end of a session it is usually a five or six. With sessions longer than an hour and a half I need to retest my blood sugar and either have more insulin or eat some fruit to keep going. I am still working on understanding an exact formula but know that I have improved my health enormously already. I now feel five years younger rather than like an old woman.
Diet
The recommended healthy diet for diabetics is also ideal for exercise. Lower levels of fat in the diet make me feel full of energy and I perform better. Different body types work well with different intakes of nutrients. Long lean builds (ectomorphs) seem better suited to three larger meals; more muscular types (mesoporphs) like me are better with the old style of diabetes management of three smaller meals and two or three snacks; and shorter, stockier people (endomorphs) benefit from little and often and need to be more careful not to overconsume. Exercise should be timed so that you have energy in your system for the workout – eating an hour or two before exercise and within two hours afterwards to replenish the energy used is ideal. The right level of insulin to restore your glycogen stores is vital or you will be left feeling lethargic. Any insulin still in your bloodstream will be circulated more quickly during exercise so you will need to have less for the previous dose. Looking into the rate of release of carbohydrates can be helpful – the Australian system of the glycaemic index can be particularly useful for diabetes control for exercise.
Gyms do not suit everybody but if every diabetic aimed to do half an hour of moderate activity every day we would cost the NHS a great deal less in health care. Anything active helps: walking, cycling, swimming, housework, gardening, or playing with your children.
The recommendation for those keen to reach higher heights is 20-40 minutes of moderate to intense cardiovascular activity 3-5 times a week and 2-3 resistance sessions weekly working 8-12 muscle groups, plus a good stretch afterwards (more important for diabetics who lose flexibility more dramatically if they don’t).
I cannot emphasize how important regular exercise is to diabetes management. It can improve your quality of life enormously and is an antidote to the effect of diabetes on the cardiovascular system, improving blood flow and reducing the side effects that diabetes causes. I believe it is generally harder for a diabetic to exercise as there are more off days – not just the tiredness or lack of motivation that everyone gets, but also the frustration of the high or low blood sugar that can mean you cannot perform as well as on a good day. Or the dreaded ketones that mean you can’t do any activity.
You just have to go with the flow, understand as much as you can and remember that although the challenge is greater, the improvements to your health are more dramatic than for a non-diabetic. Remember the Nike ads – just do it!