By Darren Spong
Darren is training to be a professional footballer for Bournemouth Athletic Football Club. He is a 17-year-old who developed diabetes at around 8 years old, who is now having problems with his glycaemic control in the presence of his sporting activities. How can he improve his control and performance?
Football Training Schedule 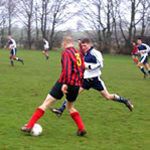 On Monday, Wednesday and Friday – he starts training at 10.00 am for 2½ hours. There is a warm up session of running around the pitch at low intensity for about 15 minutes, followed by stretching. There is then a low intensity exercise of football drill passing the ball for another 45 minutes. Therefore the first hour of exercise is really of quite low intensity and with little degree of strenuousness. This is then followed by 13 minutes of vigorous keeping the ball in squares, followed by a 45-minute five-a-side competition. He then breaks for lunch and in the afternoon they have a further training episode of approximately 2 hours followed by a warm up period, but omitting the passing the ball exercise and then going on to a five-a-side match. He then has a snack, his evening meal and then goes to bed.

On Thursday and Sunday he has a rest day, where he has a normal food intake and 4 injections of insulin per day. On Saturday’s which is match is match days, he wakes, has breakfast then has his match at 11 am, lasting 90 minutes. He then has his lunch and a quiet afternoon, and then goes out with his friends in the evening.

An estimate that he is taking approximately 520-550 grams of carbohydrate per day, which is equivalent to 2,000 calories as carbohydrate. Darren’s problems are that he is running his blood glucose chronically high to avoid hypoglycaemic episodes. He takes Lucozade a bolus before each sporting period and has no idea whether his blood glucose rises or falls during the exercise period concerned.

For Those Who Train Less Intensively
The experience of Rod Kafer and Darren Spong are fantastic insights into professional sports, but the changes required for people who only train infrequently of have weekly matches are a bit different. The goal of this exercise is not to achieve maximum performance as we have already seen, but to have fun, to help control weight and to protect the cardiovascular system. Blood glucose control and avoidance of hypoglycaemia remain important, but there is little need to load up with carbohydrate, especially if an important aim is weight control. For a weekly morning or afternoon football or rugby match, we suggest that the normal dose of long acting insulin is taken on the night before. If Lantus is the normal basal dose, it would be wise to reduce this by about 25% on the previous evening. Have your normal pre -match breakfast, but again reduce the pre meal insulin, but this time by 50%. Check your blood glucose before and after the match and again at half time. If your blood glucose rises during the match, it means that the glucose production is greater than use, so the pre-breakfast insulin dose can be increased, or if you are on Lantus, the bedtime dose. If blood glucose falls during the match, glucose use is greater than production so reduce the pre-breakfast insulin dose further, and take 30 grams glucose every hour either drink of snack form. Have a snack at the end of exercise with some insulin, 2 units per 10 grams carbohydrate, and then have your normal meal insulin. In the evening reduce your nighttime insulin dose by about 10% to reduce the likelihood of delayed post exercise nocturnal hypoglycaemia. For those of you who train in the evenings, or go to the gym, exactly the same principals apply, but do not adjust the previous night’s insulin dose, but do reduce pre training and bedtime insulin dose. You will have to experiment to see what suits you, but be particularly careful not to overdo the carbohydrate intake as most people burn little energy during training and matches, and excess intake post exercise shoots blood glucose up wildly.