OK, we have now gone seriously up market here, but the lessons from polo are applicable to all equestrian events. Please send any other horsey content! 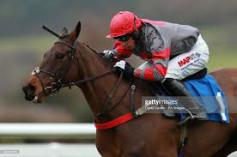 David Crosse has fought his way to a profession licence after many years of keeping secret his T1DM.

However, he became the subject of a BHA investigation after the authority received an anonymous tip-off about Crosse's condition, claiming he was a danger to others, leading to a BHA inquiry at which he received an entry-level penalty.

"The BHA was sympathetic," said Crosse. "The rules changed just under a year ago and the fact I've had proper medical care and looked after myself were key factors. It's a weight off my shoulders. I don't have to hide to inject myself.

"If anything, it makes me better as a rider. It's not a career-ending illness. I can lead a normal life as long as I look after things properly."

Point-to-point rider Hector Barr was issued a licence without restriction last year following improvements in the understanding and management of the condition.

Although Crosse made sure select people knew of his condition so it could be disclosed in the event of a bad fall, he hid the fact he was injecting himself with insulin at the races, doing it under a towel or in the toilets. He has been advised throughout by specialist Dr Ian Gallen

"The way the BHA has dealt with my case means if there are others like me they can come forward knowing that nothing bad is going to happen," said Crosse, who is also a jockey coach.

"That's what I'd feared for the last 13 years, that this would come out and my career would be finished. It all depends on how you look after your diabetes." 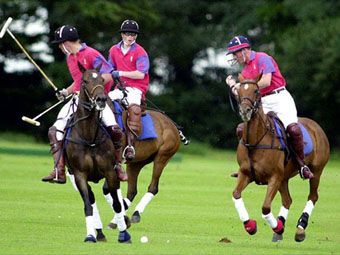 Miss K.L. is a 30 year old sportswoman with type 1 diabetes of 20 years duration She is a keen polo player. I do not know very much about polo but she told me that she competes in matches that last for approximately an hour in 7 minute sessions. She rates this in physical intensity of about 9/10. She also trains for polo with horse riding for an hour in time for which she rates about 6-7/10. She does daily gym work for an hour which equates to physical intensity of 4-5/10. She is taking approximately 100 gm of carbohydrate per day. She did not bring in any records of her blood glucose monitoring today.

During her sporting events her blood sugars drop dramatically from 10 down to 3-4 during an hour’s polo match. She also notices a marked loss of performance towards the end of these matches.
Management Plan
1. She needs to check her blood glucose before and 2 hours after each meal; so that she can make sure that her carbohydrate counting and the correction values are correct.
2. She also needs to check her blood sugars before and during sporting events so that we work out the rate of decline in her blood sugars. This could be ameliorated by taking extra glucose in the form of drinks, Dextrosol or even jelly babies, but it may be added to by her Lantus. If there is evidence of this then we should consider transferring her onto pump therapy. 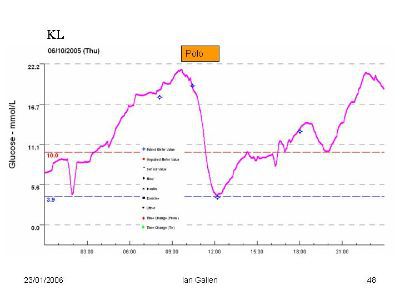