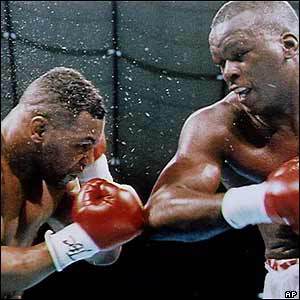 Boxing is a very controversial subject for many doctors, who object because of the potential injury that may occur. For people with diabetes, the possibilities of hypoglycaemia make the regulatory authorities even more nervous, and so boxers are banned from professional boxing. This is ironic given one of the greatest heavyweight boxers was Buster Douglas! Douglas a former undisputed world heavyweight boxing champion who scored one of the most shocking upsets in sports history when he knocked out undefeated champion Mike Tyson on February 11, 1990 in Tokyo, Japan.

This site never takes a stance on such issues, merely trying to help anyone with diabetes complete theit chosen sport sucessfully.
Boxing

Muhammad Ali has made history after becoming the first boxer in the country with type one diabetes to be granted a professional licence by the British Boxing Board of Control. After nearly three years of hard work trying to battle the decision, Ali was finally granted his license during a meeting with the board on Wednesday, as his team were able to provide key documentation proving that his condition would not disrupt his ability to box.

The 25-year-old is delighted that things are now finally back on track, and he is thankful to those around him who have helped him get to this point.

"I've been fighting for my career since 2015. It's taken two and a half years for it to be resolved and I respect the British Boxing Board of Control for granting me the license,"

"Nothing happens overnight and it's taken a lot of hard work to get to this point. I've had help from my advisor and manager Asad Shamim, plus from Diabetes UK and from Dr Ian Gallen, so I really appreciate all that they've done for me.

"This breakthrough has set a precedent and opened the door for other boxers with diabetes to get their license. I've had messages of support from other boxers similar to my position and I feel proud to have paved the way."

Ali had an impressive amateur career, including winning the Haringey Box Cup in 2013. He was set to make his debut in Blackpool in December 2015 before finding out he wouldn't be granted a license, something which left him devastated at the time.

"In 2015 as soon as I got told I wouldn't be able to get a license I was heartbroken. I gave around £800 worth of my boxing gear away to local lads and said put it to good use as I can't use it anymore," he said.

"People would ask me what's going on with my career and I wouldn't have anything to tell them. Even my mum and dad were saying there wasn't any buzz or excitement in the house anymore.

"I'd put boxing to bed and become a personal trainer, but then I spoke to my advisor Asad Shamim and he said we should look into it and that he would help with all of the legal side of things.

Muhammad Ali has been granted a boxing license

"We were able to put together a protocol and show the British Boxing Board of Control why I should get my license.

"To get the approval at the meeting on Wednesday was amazing, and I'm already excited thinking about my professional career."

"I want to become British champion most definitely. The British Boxing Board of Control have granted me a license, and I'd love to show them it was the right decision by winning the Lonsdale belt," said Ali.

"Even by getting this far and having the chance to box means that I've already won. It shows that if you don't ever give up you can achieve your goals.

"The plan is to make my debut in September. I've constantly been training and sparring and now I'm ready to be let off the leash.

"I used to dream of becoming a champion and now my dream has the chance to become a reality."

CM has had type 1 diabetes since 2002 and treated with a basal bolus regime. His current diabetic control uses a basal bolus regime using Glargine and Novorapid.
CM is a keen boxer but he was stopped from boxing because of an episode of hypoglycaemia, even though he has good warning of hypoglycaemia
He is training as a 64 kg weight boxer and hopes to go to welter weight as a profession. He is currently using head protection.
On Monday after work he does 10 minutes of skipping exercises followed by 3 minutes of shadow boxing. He then punches bags for 7 episodes of 3 minutes. He then punches the Cad for 3 minutes and plans to spar. The same training happens on Wednesdays and Fridays.
On Tuesday he goes to the gym and does aerobic exercise or runs 3 miles. He plans to be boxing in a bout on Thursday and on Saturday morning he runs and has a rest day on Sunday.
Management suggestions are:-
1. He needs to regularise his diabetic control. This should be done by increasing his Lantus so that his morning blood sugars are in the range of 4.5-6.5 mmols.
2. He needs to regularise his carbohydrate to insulin ratio and he should check his blood sugars an hour after a meal and when he finds that his blood sugars are more than 3 mmol excursion after a meal, then he needs to increase his insulin to carbohydrate ratio. Initially, through 2 units for 15 gm and then measure it up to 2 units for 10 gm.
3. If CM is doing any sporting activity within an 1½ hours of eating and injecting then he will need to reduced his insulin down by half.
4. CM should not use his arm as an injection site as the insulin is likely to be IM and very rapidly absorbed.
5. CM can correct glucose during training. He will need to check his blood glucose before and after each training period. If his blood sugar is less than 5.5 prior to starting then he will need to take 20 gm of glucose immediately. Otherwise, he should be taking between 30-60 gm of glucose per hour of training in the form of Dextrosol tablet, Lucozade Sport, a glucose drink of 10% or Jelly Babies.
If his blood sugars still fall with this regime during training then he needs to increase his rate of glucose.
CM would be a candidate for insulin pump therapy and this could be removed during his bouts but kept on during training.