By Chris Priest
Not a sport, but an important issue for many people with diabetes who want to see the world safely. Chris Priest has something useful to say about this.
World Travel/Backpacking
In the summer of 2003 I was fortunate enough to go backpacking around South-East Asia for two months. I have been diabetic for 8 years now, having been diagnosed at the age of 12. I control my diabetes using a routine of four injections each day, three short acting injections of Humalog and a final longer acting one of Humulin I prior to bed. This routine for me seems to work well and has resulted in me being able to control my sugar levels and diabetes as a whole.
Backpacking was a rather daunting prospect for me because of my diabetes, but I can say that it is possible, although rather difficult at times it should not prevent you from doing such a trip. The main worries I had prior to departure, and indeed whilst travelling were that my insulin was not going to be able to be kept refrigerated at all times; what would do if my bags were lost or stolen with my insulin in; and how the heat would affect me in terms of my sugar levels.
Insulin Storage
Insulin ideally should be refrigerated when not being used, but when you live out of a backpack this is not always possible. I found that when staying in youth hostels there is not always (hardly ever) access to your own personal fridge and as such this can create difficulties. I often spoke to the hostel staff who were more than willing to store the insulin in there fridges in the kitchen or bar for the period with which I was a guest and this worked well. So don't be afraid to ask them as they are more than likely to oblige. However, in some of the more remote places fridges are a lot more difficult to come across. I had a small leather carry pouch that I carried my insulin in and when it was not possible to use a fridge I made sure this was stored in a cool shaded place and often covered it with a wet flannel so as to keep it as cool as possible. This is by no means an ideal method, but I found it worked reasonably well for me.
I was also a little concerned that my backpack could be stolen or lost in transit and as such always ensured that my insulin was kept in my day pack (hand luggage basically) so as to attempt to avoid this problem. However, should you lose your insulin there are many hospitals from which you can gain access to the type of insulin you need, although this is quite pricey so best to try and just avoid this situation altogether and make sure you know exactly where it is at all times.
The heat was another worry, partially due to possible lack of refrigeration and also because of how it could affect my sugar levels. I contacted Lilly Pharmaceuticals prior to my departure and enquired into the longevity of their insulins and was able to discover that they can last for a number of weeks without being refrigerated as long as they are kept reasonably cool, and when they are no longer useable their colour and consistency often changes, but you should check up on that yourself. It is difficult to say exactly how I adjusted my doses during the time spent backpacking, however I tended to lower each individual dose by 10-15% when experiencing hot climates and was lucky enough to never experience a hypo whilst away, although I sometimes ran my sugar levels a little high, at say 9 or 10, to allow for a margin of safety. On long bus and train journeys however, I tended to bump up my dosages a fraction as when you sit still for long periods and don't exert any energy your sugar levels begin to ris 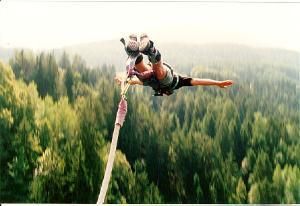 Many of you will want to try some of the "extreme sports" whilst travelling too, like skydiving, scuba diving, white water rafting etc. The only problem I found with wanting to indulge in such activities was that many companies would not let diabetics take part, mainly for insurance reasons, unless you had a doctors note saying that you had good control and as such were fit and able to participate. So if you think you might want to do these things then make sure you have one!!

Travelling was a fantastic experience and one that I will definitely be embarking upon again in the near future. It is made more challenging by diabetes but is by no means off limits to diabetics, we just maybe need to take a little more care over ourselves and our belongings than others and make sure that anyone you are travelling with, whether you have met them out there or already know them, knows that you are diabetic and knows what to do should anything go wrong.