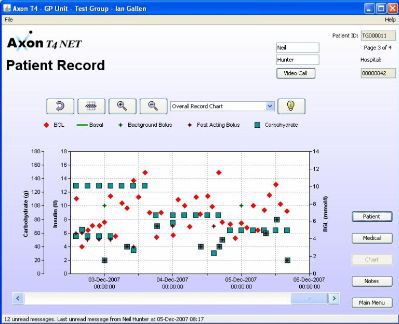 Neil had some serious monitoring technolgy. Axon has developed application software which runs over the Internet. The system is referred to as the Axon

T4NET. The core software modules are a spin-out from technology developed at the Computer Laboratories at Kent University Canterbury.The system runs on a standard PC with an Internet connection.

The T4NET software has been loaded onto a laptop PC

Provided with a military grade laptop PC with built-in GPS.Accu-Chek blood glucose reader and an Accu-Chek Smart Pix device reader
Upload of Data to PC
The upload of data from the blood glucose meter involves pointing the Accu-Chek blood glucose meter at the Accu-Chek Smart Pix. Tell the Axon T4NET that you are uploading data. Press two buttons and wait for upload to be completed. Neil enters his insulin readings and CHO amounts into the Axon T4NET diary. The glucose results and diary entries are consolidated and Neil sees the results in graphic format instantly. Data is stored on the Laptop PC.
Upload from PC to Axon File Servers
The satellite phone is connected to the Laptop PC via a serial port cable. The satellite phone then works as a modem to send all of Neil’s data via Satellites in orbit onto the Internet and to File Servers 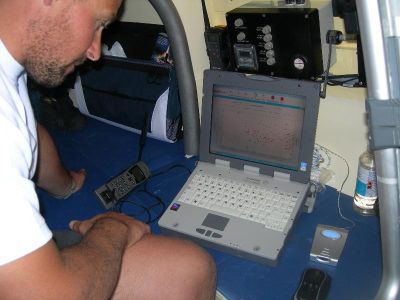