Childrena and Adolescents with Type 1 Diabetes 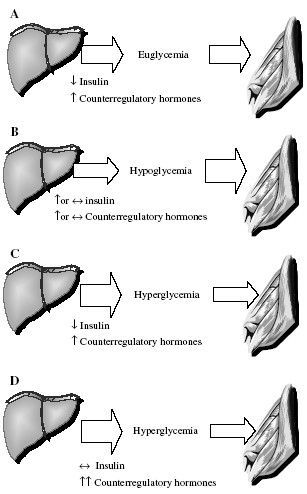 The mix of fuel utilization during exercise in youth with T1DM appears to be similar to that of nondiabetics, except that those with diabetes may rely even more on fat and less on carbohydrates. In individuals with T1DM, the pancreas does not regulate insulin levels in response to exercise, making normal fuel regulation nearly impossible. Moreover, there can be deficiencies in the release of epinephrine and glucagon that would normally help facilitate glucose production and release by the liver. As patients soon discover, they may have either increases (hyperglycemia) or decreases (hypoglycemia) in blood glucose levels during exercise. The following sections outline the typical problems of over- and underinsulinization during exercise that can contribute to the development of acute metabolic complications (Fig. 1B-D).

Many find that intensive insulin therapy helps with glucose management during exercise,

because it allows for frequent changes in insulin dosages, particularly if they use an insulin pump. Intensive insulin therapy (i.e., ‘tight’ control) attempts to mimic the natural pattern of insulin secretion. Although most believe it to include higher insulin dosages, it simply requires closer blood monitoring and more frequent insulin injections or an insulin infusion pump to prevent extreme glucose excursions. The move toward more aggressive insulin therapy to prevent long-term complications from diabetes increases the risk of exercise-associated hypoglycemia for some active people with diabetes, especially young patients. It has recently been stated that hypoglycemia is the most severe acute complication of intensive insulin treatment, with exercise being a frequent cause. For example, in a small cohort of youth with diabetes, 45 min of moderate exercise performed 2 h after breakfast caused asymptomatic nocturnal hypoglycemia in nine of 10 patients who maintained their usual basal and bolus insulin pump infusion rates. Even when basal insulin rates were omitted during exercise, six of 10 patients had nocturnal hypoglycemia . Nonetheless, such aggressive insulin therapy should be considered because it helps to prevent long-term complications from the disease and because physical performance and aerobic capacity are related to the degree of metabolic control (see above).

Most children and adolescents with type 1 diabetes who exercise for prolonged periods (i.e., >30 min) experience a significant drop in blood glucose levels. Hypoglycemia is not restricted to those individuals who begin exercise with lower glycemic levels, as there appears to be a strong positive correlation between the drop in glycemia and the pre-exercise value. In addition, severe postexercise late-onset hypoglycemia (i.e., up to 36 h after exercise) may be particularly prevalent in active children with T1DM, possibly because proper insulin and nutritional strategies are not adopted while muscle and liver glycogen stores are being replaced. Patients and parents should be particularly cautious therefore if exercise is performed before bedtime. Strategies to limit the possibility of hypoglycemia caused by exercise are provided under the Practical considerations section below.

In addition to intensive insulin therapy, there are other factors that contribute to over-insulinization and hypoglycemia during exercise:

(i) The absorption of injected insulin increases withexercise. The increase insubcutaneous tissue and skeletal muscle blood flow and rise in body temperature is associated with a concurrent increase in insulin absorption and acceleratedhypoglycemia .

(ii) Plasma insulin levels do not decrease and may even increase during exercise [see (i) above]. A failure in the ability to lower insulin levels during exercise, as would normally occur in a non-diabetic individual, causes a relative hyperinsulinemia that impairs hepatic glucose production and initiates hypoglycemia, usually within 20-60 min after the onset of exercise.

(iii) Exercise causes enhanced muscle insulin sensitivity via increased activation of non-insulin sensitive glucose transporters. During exercise, the dramatic increase in non-insulin-mediated glucose disposal considerably reduces the need for circulating insulin levels. Because the increase in insulin action persists after the end of exercise in children with diabetes, probably to help replenish muscle and liver glycogen stores, patients are at increased risk of hypoglycemia after the completion of exercise.

Under-insulinization and hyperglycemia. Not all forms of exercise are associated with hypoglycemia, and some patients frequently report hyperglycemia immediately after heavy exercise, probably because of an inability to secrete insulin to compensate for elevations in catecholamine levels . Indeed, intermittent high-intensity exercise, which reflects field and team sports, does not appear to increase the risk of hypoglycemia in patients with T1DM, probably because of increases in catecholamine levels.

In children with poor metabolic control, exercise can cause an additional increase in blood glucose and ketoacidosis. The rise in blood glucose is caused by exaggerated hepatic glucose production and impairment in exercise-induced glucose utilization by muscle (Fig. 1C). Increased ketone body production results from elevated FFA release from adipocytes (i.e., lipolysis) and possibly from an increase in intrahepatic ketogenic efficiency. Hyperglycemia and ketosis during exercise is particularly undesirable because it causes dehydration and may decrease blood pH, both of which impair exercise performance. Heavy exercise (i.e., >60-70% VO2max or >75-85% of maximal heart rate) may particularly aggravate this condition, because increases in catecholamines and glucocorticoids will further exaggerate the elevations in glucose concentrations and ketone production.